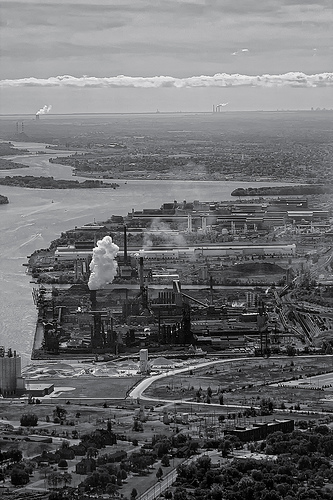 Southwest Detroit, MI 48217 – otherwise known as Michigan’s most polluted ZIP code – is home to roughly 9,750 people.  But, as its nickname suggests, it is a less than desirable place to live. Because the residential areas in this region are surrounded by heavy industry – including oil refineries, asphalt plants, and many other such facilities – residents are continually surrounded by a polluted environment. The by-products from these surrounding industries are released into the air, leached into the soil, and dumped into the water. The residents of these neighborhoods breathe in this air 24 hours a day, seven days a week, children dig in this soil, and almost everyone drinks the water. Given these conditions, it should come as no surprise to learn that residents suffer a range of serious health problems. “The neighborhood is full of children with asthma,” reports Sarah Cwiek, from Michigan Radio. Residents believe the pollution is a cause for cancer and other deadly illnesses that plague the members of this community as well, even though a link hasn’t been officially established. To show a link, the health studies demanded by residents must be conducted in order to show direct causal connections between the pollutants being produced by local industries on the one hand, and the poor health conditions experienced by the community members on the other. Detroit City Councilman Kwame Kenyatta and others say that new research points to less visible effects of air pollution – like diminished cognitive abilities in children. But as time passes and as researchers work to uncover the cause and effect of these pollutants, the residents of Southwest Detroit are becoming more and more frustrated with their condition. “People in Southwest Detroit say they’re already in the middle of a living experiment,” writes Cwiek, “And they want authorities to start paying attention.”

Metallic dust on the windowsill of a home in Southwest Detroit

The levels of pollution in Southwest Detroit are so high that you can often see, touch and smell it.  Recently residents have been very concerned about a metallic dust that rains down upon their neighborhoods nightly. They wake up in the mornings and the grass, their cars, their house — everything — is covered in a thin layer of whitish, metallic powder. “Some of the particles are so fine, they’re like powdered sugar. And you breathe them,” reports Roland Wahl, a resident of the area who experiences this alarming dust every morning. It is no wonder that the area of Southwest Detroit has some of the highest asthma rates in the region. Sandra Svoboda of the Detroit Metro Times desribes the raspy voice of Linda Chernowas, another resident of Southwest Detroit, as she tells about a black, oily film that she often finds on the pool in her yard. Chernowas has been diagnosed with reflux laryngitis, and her doctor told her to move out of the neighborhood, under the belief that the pollution is what was making her illness worse. This oily substance and the metallic dust mentioned above are two visible elements of pollution out of many invisible toxins that fill the environment in this area.

Home in the Delray community against a backdrop of heavy industry

It is real stories and experiences like these that raise questions that absolutely must be addressed. Questions such as: How can an area nicknamed “Michigan’s most polluted ZIP code” continue to have people living in it without the State, or any other governmental entity, doing anything about it? Why is this entire community of Southwest Detroit continually subjected to these high levels of pollution? Why are none of the industries surrounding these fence-line communities taking responsibility for the pollutants they release? Why does it seem as though the health and well-being of the people living in these areas mean nothing to the industries around them?

Even though there seem to be an overwhelming number of environmental justice problems in this area of Southwest Detroit, there are many resources and community activists that are working toward achieving justice by petitioning for: health studies, compensations for health costs, requirements for industries to take responsibility for their pollution, and other such measures geared toward ultimately bringing back a healthy place for people to live.

The goal of this website is to illuminate the environmental injustices occurring in Southwest Detroit, and to provide resources for community members and information for people who are unfamiliar with the area.