Environmental injustice issues have persisted because the wealthy have progressed and benefited from the environmental degradation that continues to plague the lives of the socially oppressed.

Southwest Detroit is an industrialized city. In the ZIP code 48217 of Southwest Detroit there are 8 oil refineries, 3 factories that produce steel, 5 asphalt plants, 1 hazardous waste collection site, and that is only to name a few of the types of industries in Southwest Detroit. In addition, Detroit has one of the busiest international land border crossings in the U.S., the Ambassador Bridge, which operates 24 hours a day, 7 days a week.

Living near an industrial area increases the risk of lead poisoning because of the increased amounts of dust coming from the industries. Also, jobs in construction, lead smelting, auto repair, and battery manufacturing and recycling increases the risk of lead poisoning in the employee, as well as in their families because the particles are carried home on the worker’s clothes.

Source and information on preventative methods

Pollution from the Ambassador Bridge

One of the major air pollutants that is difficult to control and monitor is fugitive dust particles. These dust particles cause negative health effects in the pulmonary and cardiovascular systems. Children, individuals with pre-existing respiratory problems, and the elderly are the most at risk for the health complications induced by the pollution of these dust particles. These particles also disturb the natural environment because they settle on soil and water, and alter the balance between nutrients and chemicals that plants and animals need to survive.

Currently, it is estimated that 29 percent of the land is classiﬁed as industrial activity, which is equivalent to about 20,600 acres; and the EPA has figured that approximately 3,486,110 trucks per year use the Ambassador Bridge crossing.  That is equivalent to 9,550.98 trucks per day crossing this bridge. 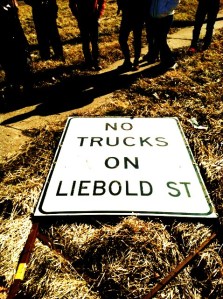 This was found on the ground on Liebold Street. This street is located directly under Interstate 75, and surrounded by industries. There was an effort to get this sign put up to improve conditions in the community, because the trucks were passing through are loud and their emissions make it difficult to breath.  (Photo courtesy of Cara Farris)

THE CONSEQUENCES OF COAL POWER

There is only one coal power plant in this region, but one is enough to cause irreparable damage to the natural environment and to the health of the people. This plant is the DTE River Rouge Power Plant. The burning of coal, according to the Union of Concerned Scientists, is the leading cause of acid rain, smog, global warming and air toxins. It is estimated that the typical coal plant every year produces 3,700,000 tons of carbon dioxide; 10,000 tons of sulfur dioxide, which causes acid rain, as well as particles that are small enough to penetrate deep within the human lungs. Furthermore, the typical plant also produces 720 tons of carbon monoxide a year. Carbon monoxide can cause headaches, as well as additional stress for people with heart disease; it can even be fatal if encountered in concentrated amounts. In addition to these pollutants, the average coal factory also produces 170 pounds of mercury a year, which seems relatively insignificant compared to the other emissions until one considers that it takes only 1/70th of a teaspoon to contaminate a 25-acre lake and make all of the fish in the lake unsafe to eat. To continue to add to this list, 225 pounds of arsenic, 114 pounds of lead, 10,200 tons of nitrogen oxide, 220 tons of hydrocarbons, and 500 tons of airborne particles are emitted by an average coal plant annually. Given that the DTE River Rouge Power Plant has been determined to be one of the most heavily polluting plants in Michigan, these estimates are most likely low for this particular plant.

Specific Facts for the DTE River Power Plant in Detroit:

This is the Power-plant; the small dead patch of grass is their “Certified Wildlife Habitat”. (Courtesy of Cara Farris)

Going to the source of this picture you can zoom in on each state and find the mortality rate for your own state, but also take notice to the fact that the problem areas in Michigan are concentrated around the Detroit area.

This is a direct quote from the DTE Energy Environmental webpage, regarding the River Rouge Power Plant in SW Detroit. I think their statements need to be challenged.

Highlights: Currently the River Rouge Power Plant is pursuing certification as a corporate wildlife habitat by the Wildlife Habitat Council. The site is the winter home to a pair of peregrine falcons. The plant Green Team is installing bluebird boxes and raptor perches, planting a butterfly garden and building brush piles for wildlife habitat. ISO 14001 certified 2003

We, Union and Management representatives, together, are committed to:

The “Certified Wildlife Habitat” doesn’t seem very promising, and the number of deaths and hospitalizations a year from this particular coal plant are still high. Not everything is as it seems and that is why it seems prudent and justified to  challenge the River Rouge Power Plant’s claims regarding the environment.